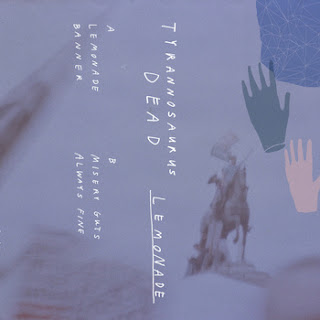 "A delicious snack for your ears"

Though the fuzzy sound quality generated by their almost prehistoric recording equipment may suggest otherwise, indie-pop quintet Tyrannosaurus Dead is not a band of anthropomorphic dinosaurs. They’re actually a group of friends from England with a similar goal in mind: to write catchy songs that are accessible to teenagers of the twenty-first century, yet strike a nostalgic chord with those who grew up in the early nineties. Their latest release is Lemonade, appropriately available as both the supposedly obsolete (yet still cool) cassette tape format and a free download, bridging the generation gap.
Opening the four song set is the title track, an anthem for optimists of the world, complete with its rallying cry of “If you’ve got lemons, make lemonade!” The warbly guitar tone in this song is warm, crunchy and melts in your mouth, making a delicious snack for your ears. Buried underneath the sonic fuzz are sugar saturated call-and-response vocals between singers Billy Lowe and Eleanor Rudge, made even more overly pleasant by their British accents. “Misery Guts” is another winner, a bit more blistering than the other three tracks with frantic drumming and brilliant crescendos. “Always Fine” rounds out the tape, a sparse repose from the gravelly sound of the previous tracks. Rudge’s vocals take the driver’s seat here, usually a red flag for fans of lo-fi music, yet fine with me, as she has a first-rate voice. For connoisseurs of music that value simplicity, beauty and fun, Tyrannosaurus Dead would make a great stocking stuffer.
Author: Unknown