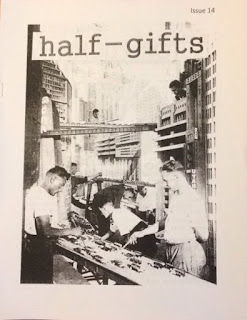 Half-Gifts issue 14 includes interviews with San Bernardino jangle-pop project Foliage and two local record stores; Sugarcube and Torn Light. This volume also includes a look at the most exciting record labels of 2015 and, as usual, plenty of album reviews. GET YOUR COPY HERE

Californian bedroom-popster Alaris O'Heart has quietly released some of the most innovative and well-composed lo-fi music over the past two years, masterfully synthesizing elements of late 00s freak folk, drone and even hip-hop to extract cinematic grandeur from his humble arrangements for guitar and keyboard. His recent self-titled cassette, pressed by southwestern imprint Alien Tapes, functions as an introduction to O'Heart's discography, (maybe even as a best-of album), exhibiting the full breadth of his abilities as a composer. "Bird", for example, replicates the bustle of Philip Glass' Music In Twelve Parts - handclaps, layered vocal harmonies, percussive rhythm guitar, liquescent keyboard riffs and faint glockenspiel tones all seem to hustle separately toward their own destination, directionless, moving as pedestrians on city sidewalks rather than as one unit marching to a motorik beat. "Cough Drops" brings O'Heart's music into Flying Lotus territory, chopping up nearly concrete walls of jumbled piano tones with trill hi-hats and a hollow snare. "The End" makes for a more conventional closer to the tape - O'Heart's usual frenetically played piano notes are herded into chords atop stomps and claps - until layers of ambience consume the track, morphing into a Sigur Ros-ian cosmos of swirling beauty, capped off with a sample from Finding Nemo. All in all, Alaris O'Heart's new tape resembles Sung Tongs-era Animal Collective covering the Juno soundtrack; it's a primal take on twee-pop that provides some much-needed variety in the lo-fi pop tape scene.
Author: Unknown 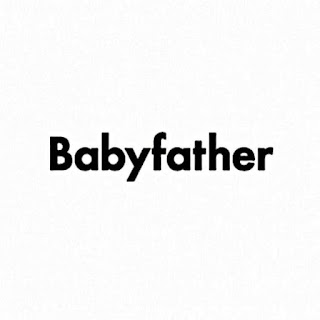 With each new Dean Blunt release, I become a bit more certain that the enigmatic, UK-based producer is the 21st century's Beat Happening. Just as Calvin Johnson's influential twee-pop trio offered a primal and lovably puerile answer to the dark post-punk sound that prevailed in the early to mid 80s, Blunt crafts a unique brand of vaporous R&B from off-kilter drum machine rhythms and woozy, repetitious samples, acting as a raw, "DIY" parallel to the "future pop" sound of SOPHIE, Holly Herndon and to a certain extent, even Death Grips. His latest output is free .zip file of 9 unreleased tracks, but by no means is Babyfather a mere addendum to last year's Black Metal. Rather, it seems to be a bit of a stylistic return to Blunt's pre-Redeemer era, with a more rhythmic, poppy twist. Save for the album's Velvet Underground-esque intro, Black Metal's minimal guitar compositions are exchanged for bleak, chopped-up samples of 80s synthpop and modern hip-hop as well as the occasional airy casio patch. As usual, Blunt's vocals are the highlight of the of the compilation, as passionate as a clumsy karaoke performance yet unmatched in their suave sense of aplomb. Accompanying them is a collection of some of his most satisfying production to date, highlights of which include "Rachel Cut", a melancholy Macintosh Plus/MF Doom hybrid, the almost arrhythmic groove of "Coco" and Babyfather's haunting, jazzy coda, "Gass". Though not rewarding a listen as Blunt's post-pop masterpiece, The Redeemer, Babyfather makes for yet another impressive addition to the sound collagist's discography.
Author: Unknown

Review: Wavves x Cloud Nothings - "No Life For Me"

This surprise collaboration between two of the nation’s finest purveyors of fuzzy pop-punk is somewhat of a return to each respective project’s lo-fi roots. Wavves’ Nathan Williams lays down his signature brand of rhythm guitar, sharp and psychedelic, creating a gritty foundation for Dylan Baldi to erect his wiry lead guitar riffs on top of. Willams’ distorted six-string assault blends impeccably with Baldi’s prodigious hook-writing ability on cuts like “Come Down” and “No Life For Me”, but the album’s most successful moments stem from its two lone solo cuts. “Such a Drag” is a classic Wavves track, reveling in its own summery slacker vibes while Baldi’s hyper-melodic “Nothing Hurts” borrows from both Blink-182 and the Beach Boys to form No Life For Me’s beautiful closing cut. Those who come back for repeat listens will be rewarded, as there's much to appreciate and re-discover packed within the album's 21 minute confines - the transitions between William's blaring, jaggedy verses and Baldi's minimal, yet maximally catchy chorus on "How It's Gonna Go", the strange, diverse strata of garage rock textures that makes up "Hard To Find", the droning, Doors-ian keyboard that accompanies the intro of "Nervous" - together it makes for an album that is as lovably fractured and poppy as Of Montreal's Skeletal Lamping.
Author: Unknown

As the title of Ilill’s demo tape might suggest, the Japanese emo-violence outfit is a band of few words, preferring to let their instrumentation do the talking save for a few well-placed primal screams. The first of the two tracks on the demo, “She”, is a throwback to the math-y flavor of 90’s post-rock that I love to search for in boxes of used 7” records. Sludgy bass oozes like lava atop complex rhythms while hypnotic lead guitar arpeggios fill the air like noxious smoke. Just as the listener begins to succumb to the track’s narcotic drone, buzzsaw chords and a blastbeat usher in its explosive coda. “Il” maintains the level of energy carried over from the end of its predecessor, springing immediately to life on the strength of breakneck percussion and frenetically played riffs. (......) is a solid first look at ilill, giving us a look at the full breadth of the band's ability to weave interesting melodies and textures at any pace.
Author: Unknown

Singles of the Year (so far) Part 4


AGWNN's gradual evolution from molten, nearly formless noise pop to lush folk-rock has been fascinating to witness over the course of the UK-based solo act's six-year lifespan. Each installment in the project's discography acts as a scrapbook photo of sorts, from the lovably primal Mountain Debris to the angst-riddled Whirpool and most recently, to Feathers Wet, Under the Moon, a mature and rather "professional LP. Trimming the tape hiss and quirky experimentation that accents his usual output, frontman Alexander Shields instead invokes an alt-country ethos that recalls Lambchop, Red House Painters and The National's early output. "Orion" is the new album's standout cut, gliding on proto-grunge fuzz, plodding bass and twangy lead guitar. Shields' ability to pen heart-wrenching hooks is on full display, and it's especially evident in the transition from verse to chorus, trading crunchy rhythm guitar for gloomy, clean arpeggios.
Author: Unknown

Email ThisBlogThis!Share to TwitterShare to FacebookShare to Pinterest
Labels: a grave with no name
Newer Posts Older Posts Home
Subscribe to: Posts (Atom)