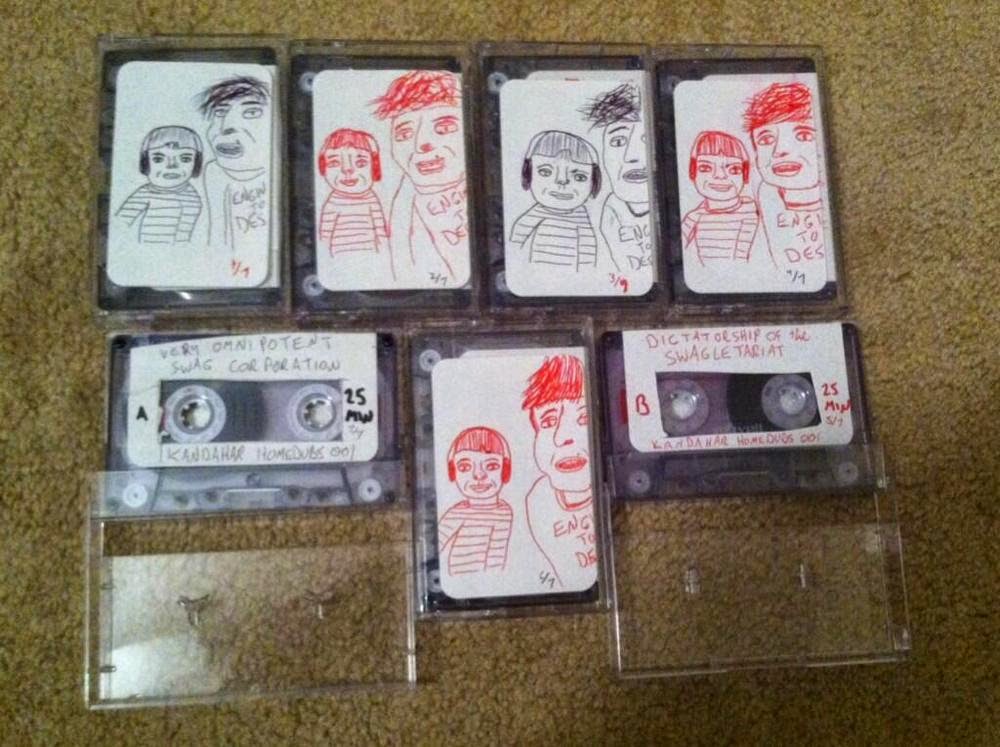 For some, this hour-long venture into the discography (two mixtapes) of vaporwave rap duo Big Booty Bill & Da Fish might seem a gimmicky release, yet others will find this release to be one that displays enough depth to warrant intense study and obsession, the sort that often stems from outsider artists with a rich collection of lo-fi explorations. Triple B and Da Fish are brothers; the former is in his mid-to-late teens and the latter, I assume, is about eleven or twelve years old. The two have a chemistry that only kin can share, exchanging cleverly written (and often hilariously deadpan) verses. Bill is blessed with nice flow and, once a dash of reverb is added to gloss them over, a decent set of pipes that mesh well with the sultry, saxophone-laden samples that often compose his backing tracks. Da Fish has an awkward, yet charming delivery, vocals culled straight from the elementary school chorus, stumbling over multi-syllabic phrases like "I'm a ladykiller not sure of infatuation / but if she wants to go I'll take public transportation". It sorta reminds me of a fire safety rap I'd have listened to at an elementary school assembly, given that it had the psychedelic post-internet production one might hear in a Yung Lean track. Though a couple songs lack direction on this tape, "Big Booty Boards of Canada" for instance, 90% of it hits extremely hard. "Enid", a lush, dream-pop jam about the struggle to find fast food in gentrified Brooklyn, is my cut of choice. Though a challenge to get into, Big Booty Bill and Da Fish serve up some of the freshest and most entertaining rap I've heard this year. If only I could get my hands on a physical copy... 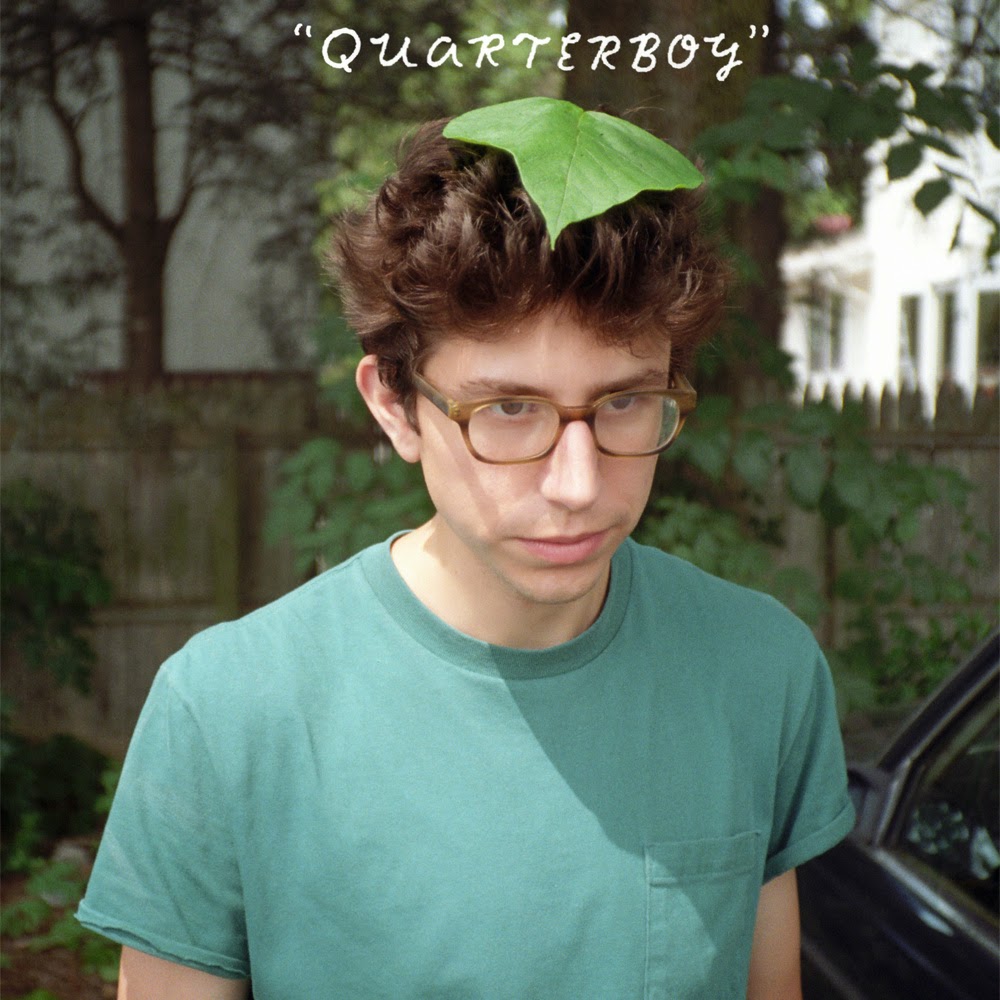 I've never been the type to swoon over all-acoustic solo recordings, but I do have a strong affection for demos, especially those of bands that I've closely followed. As a disciple of Quarterbacks' twangy, shambolic brand of twee-pop, the announcement that their upcoming tape release, Quarterboy, which heavily incorporates both of these elements, left me intrigued, but unable to predict as to whether it would blow me away, or leave me utterly unaffected. The one thing I could be sure of is that there wouldn't be a middle ground. Recently, the album was posted for early streaming on wonderingsound.com alongside an interview with the project's frontman Dean Engle. Normally, I'd just scroll straight to the album and save the interview for later, but something made me pause. I spotted a line of the review that mentioned that Engle was a major fan of both Tiger Trap and Henry's Dress, which stopped me dead in my internet-browsing tracks. A few months ago, I impulse-bought a split seven inch record that featured both of those bands, and it's proven to be one of my favorite records, a perfect fusion between punk aggression and saccharine c86 pop. This made me much more confident in this record. It was finally time for me to jump in and listen to it.

Most twee, though pleasant, can be rather emotionally one-dimensional: either happy or sad and usually excessively so. I felt a bit of that on Quarterbacks' 2012 tape, Loveseat. The tracks were lovely and concise, but lyrically, cute to the point where it felt forced. With this new release, it's not so straightforward. The songs aren't as much reflections on feelings but, rather, specific thoughts at a particular moment in time. The emotion is left to the listener's own reaction to these memories. As a teenager, Engle's newest songs particularly resonate with me, awkward memories of girls, each of them holding a piece of him, portals through which one can view snapshots of his life, some cozy, some not so much. For me, the most lyrically powerful of these tracks is "Center", which is about knocking on someone's door, waiting for them to open it, a practice that I still find mortifyingly uncomfortable. And on "Pool", "ONE TIME I SHOWED YOU A SONG / YOU ONLY THOUGHT THAT IT WAS KIND OF GOOD / I NEVER PLAYED IT AGAIN / IT WASN'T EVEN ABOUT YOU". Listening to lines like that gives me the feeling of brushing my teeth in the morning and remembering something stupid I said three years ago and thinking about that the whole car ride to school. Somehow, it really works for me in the context of this album. In short, the songs make me feel kinda sad, but oftentimes about things only covered peripherally in Engel's verse. Combined with crunchy, Sentridoh-esque acoustic chords and the occasional keyboard drum machine beat, Quarterboy is positively sublime. 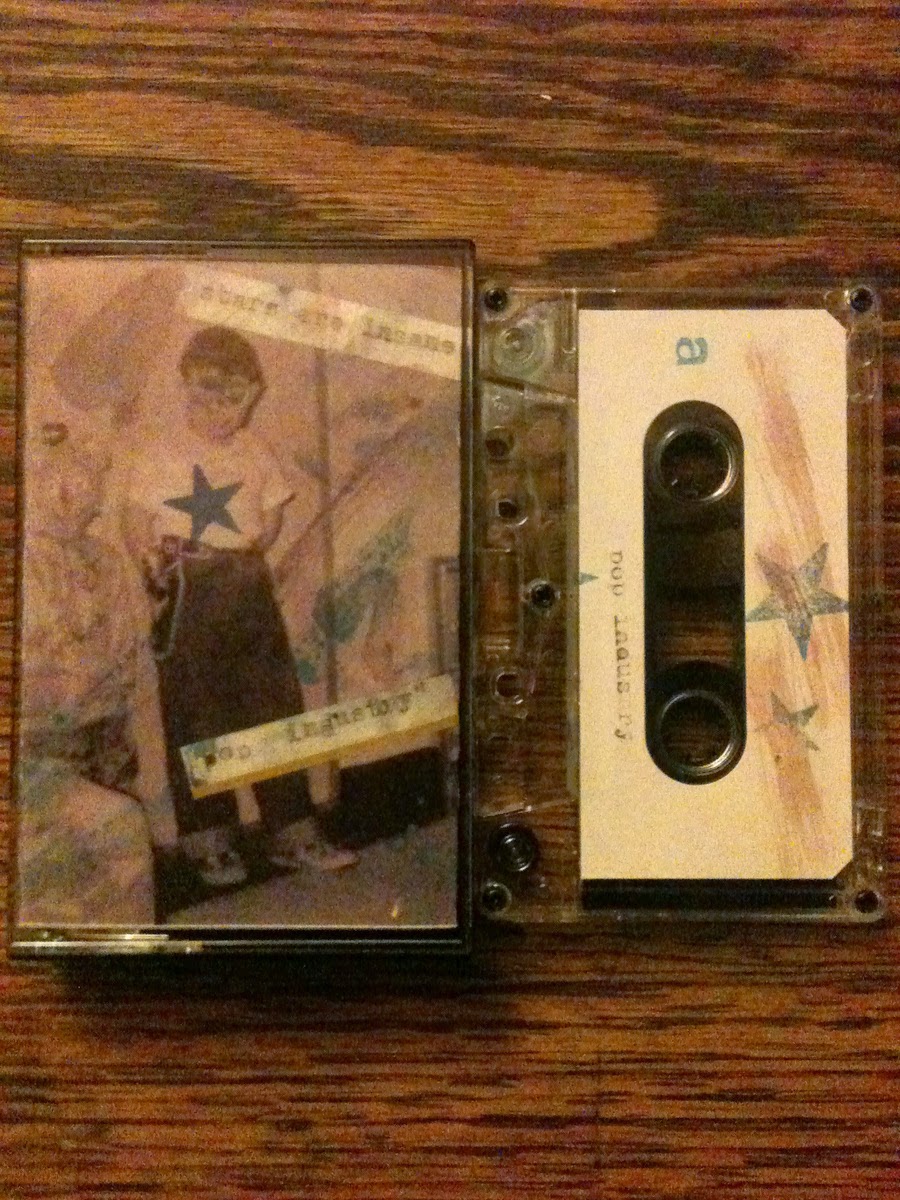 As the head of one of my favorite purveyors of noise pop, Rok Lok Records, New York's Mike Andriani is in the position to set an ever-evolving standard for the other bands released on his own label. Through his solo project, Stars Are Insane, he is able to manufacture a steady output of his own music, each release venturing into a unique blend of genres, but still strictly adhering to a single aesthetic: crunchy guitars, shimmering melodies and a warped, lo-fi texture. October's split with Monogamy displayed Andriani's ability as a composer of sorts, featuring two ambient pieces that put a sharp focus on layering. Crackling keyboard drones rippled against sharp guitar gales, extremely abrasive, yet still soft and transcendent like an overly hot shower. A 7-inch record shared with Morgue Toad found him strumming minimal bedroom folk, this time offering a bare sort of beauty, his vocals raw and exposed, veiled by paper thin acoustic chords. His first full album in some time, last month's Pop Industry, displays some of his least experimental, but admittedly his most satisfying, work to date, introducing the twangy college rock of R.E.M. to the ultra-DIY ethic of Shrimper Records circa '92. The two styles make for a match made in heaven, resulting in a 20-track effort that feels neither lengthy nor overly indulgent. It's just right. On the surface, Pop Industry feels like it could be audio ripped from a random cassette Andriani found lying on his floor. The track volumes are a bit inconsistent, adding a bit of awkward charm to the album, an element that many Rok Lok bands seem to revel in. But the deeper you get into the album, the more you appreciate the album's intensity. I see each song as a collage of separate instrumentation rather than a single entity, and I feel the more I scrutinize each song, the more and more it feels like it could fall to pieces. But things always find a way of staying together, and I always grow to become a sort of acquaintance with each song by the time it's over. Pop Industry is a very friendly album and I'll be willing to hang out with it anytime there's a tape deck nearby. 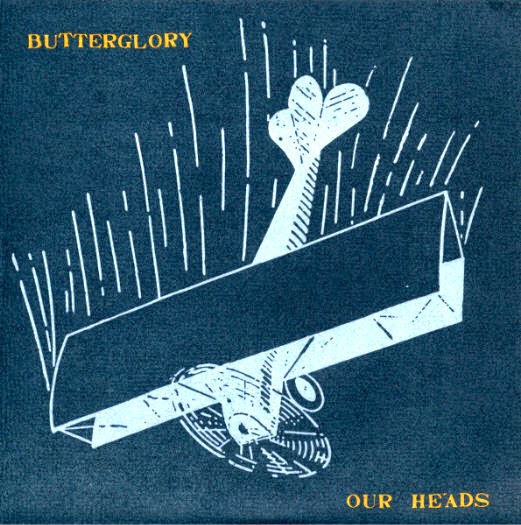 While scanning the selection of used seven-inch records behind the wooden stage in the back of Black Plastic Records, I unearthed a nugget of DIY gold, namely, Butterglory's 1993 Our Heads EP. If it weren't for a book about Merge Records I had checked out from the library over the winter, I probably would have flipped past it immediately, but I remembered from my reading that this was one of Merge's earliest and most underrated releases. Before gaining mass notoriety from Arcade Fire's towering indie epics, Merge released overpoweringly charming lo-fi pop gems such as this one. The sleeve of Our Heads is made out of a textured material that feels like old, wrinkled money that you forgot you left in your pocket, or a floppy napkin housed in a tableside dispenser at Applebee's or some place like that. In fact, I'll go with the latter analogy because the back of the record is actually doodled on with crayons, just like those given out alongside kids' menus. The record has accumulated some surface noise over the years, but that sorta adds to its crackling lo-fi texture. The 5 songs sound like a twee Dinosaur Jr, if they got rid of their distortion, and it feels like it could fit into the soundtrack of Nickelodeon's Pete and Pete. Overtly simplistic guitar lines, mechanically stiff rhythms and monotone vocals all fit together to create an effort that's somehow both bleak and innocent. An absolutely brilliant slab of wax well worth the three dollar price tag.

Email ThisBlogThis!Share to TwitterShare to FacebookShare to Pinterest
Labels: Butterglory, Our Heads, review 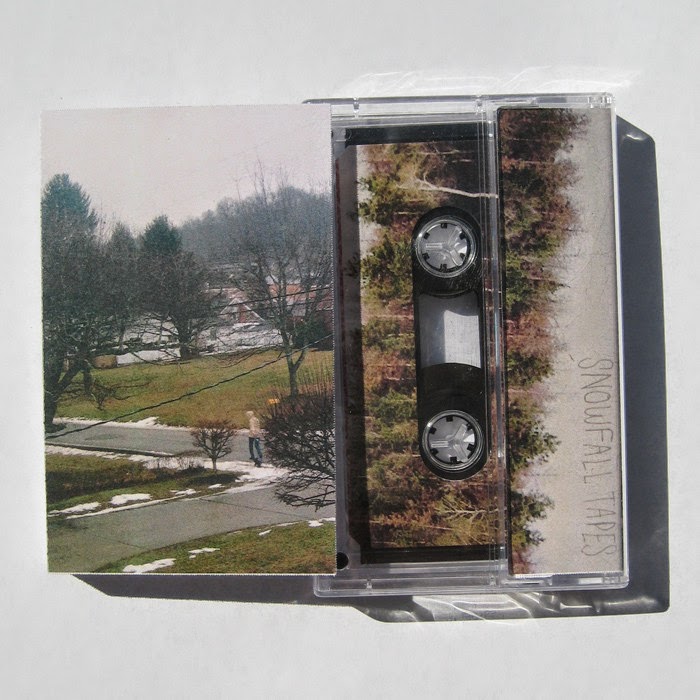 This might be the first time I've reviewed hip-hop on Half-Gifts, but this live collaboration between West Virginian beat creators Cyrus Is and Cal Thaddeus is too satisfying to pass up on. Most noticeably pretty about this tape is its design. The cover photo, for one, is a more barren take on the twinkly-emo art motif of the traditional neighborhood landscape. There's less of an inviting atmosphere here than on the cover of, say, American Football's self-titled album. Sure, both were taken in the winter (as the dead trees suggest), and even include similar looking houses, but something about the warm glow of the window against the pea green sky on the American Football cover suggests a friendly sense of intimacy longed for by the onlooker. Is it seen through the eyes of a passing pedestrian who can't help but try to peer through windows? Or maybe the creepy kid who has a crush on the girl who lives there? Perhaps it's even the lone walker on the Cal Thaddeus/Cyrus Is cover, which I feel conveys a strong feeling of isolation. Though he's strolling through a decently populated neighborhood, he's all alone with the gloomy chill of the winter air, surrounded by a vast expanse of front lawns and sickly foliage. Maybe I just dig it because the surroundings look a lot like where I live, and I often take walks. Maybe I look too far into album covers. I can't be too sure, but once again this tape's cover photo really condenses the vibe of its contents into a single moment suspended in time.

I see this tape as background music composed in that pedestrian's head as he makes his way around the block. The tracks are not exactly full songs, rather short song fragments composed of repetitive samples. Side A has a really sparse, icy vibe, with a focus on melancholy saxophone, hushed vocal samples and slow, pulsating drum machine loops. It kinda reminds me of the Hey Arnold soundtrack a bit, which makes sense for such a low-key cartoon. Side B revolves more around jazzy piano and keyboard, but it still maintains its lonely atmosphere. Track 6 on this side actually includes rap, but I can't tell if it's sampled or performed live. Anyhow, it's still my favorite cut from the side. Great tape, bump it in your walkman and take a trip around the block if you can.