Rising from the still-warm ashes of his defunct project 17 Years, Blessed Gloom is the latest creative endeavor of Missouri's resident dream-pop mastermind Tony Freijat. Post-rechristening, Freijat has plucked the choicest elements of sound from his back catalogue (noodly basslines tinged with icy reverb; post-punk rhythms; filtered, distant vocals) and sandwiched them between traces of 90s pop-rock and anthemic guitar riffs that could easily fit into a shonen anime's opening song. Poured into a mold of sleek, vaporous production that's - in a way - cloud rap-esque, this metamorphic layer of atmospheric bliss solidifies, emerging a polished and punchy slab of high-fidelity shoegaze.

My most memorable Bandcamp finds tend to be those free of the cult of indie-rock personality, quietly lurking in the depths of the "bedroom pop" and "shoegaze" tags. I've always enjoyed that the internet has given artists the ability to don goofy and surreal new identities, and sometimes I feel that the the most powerful persona to project is the complete lack of one. When band photos, interviews and twitter accounts are often a click away, to be faced with nothing stops me in my tracks. Even after piecing together the few scattered scraps of digital documentation I could uncover surrounding this gritty morsel of lo-fi pop, the only sort of background I can give you on this split cassingle is that it was recorded somewhere in the United Kingdom, divided between two mysterious projects that appear to consist of the same members. I don't know their names, and I'm completely OK with that. Their music speaks for itself in strange and beautiful dialects.

Swords' side of the tape pairs an odd coupling of funky rhythms (tinny drum machine and bouncy bass) with nebulous pulses of brass-like keyboard. In a way, it reminds me of a more eerie version of Wild Nothing's newer material - at times it even gives off some strong Ariel Pink vibes. Billy Corgan-esque vocals definitely have me leaning towards the Wild Nothing side though. Though Swords' offerings are catchier, Drahla's are a bit more captivating and creepy. "Stereo Maze" plods along on a dissonant guitar riff and a spooky synth melody that resembles a goofy sound effect that might appear in an early 00's PC game for kids. "Ethernet" is a surprisingly delicate tune, forming a dreamy soundscape from crunchy drum hits and fuzzed-out keys.
Author: Unknown

When he's not whipping up whirlwinds of pop brutale as the guitarist of French punk trio The Last Drop, Daniel Selig adopts the name Walk Home Drunk, crafting introspective nuggets of wiry guitar rock with the help of his friend Jérônymous Bouquet on drums. Their third EP and most recent effort, Toulouse Moon, is a terse, punchy collection of post-punk tunes that fuse the glum grunge attitude of early Dinosaur Jr with the bouncy, smartly-layered twang of The Libertines. Selig's charmingly laconic vocal delivery floats ghost-like between warbly lead guitar riffs and rumbling power chords. Though minimal and - save for a few blasts of distortion - fairly clean, it's these twangy and often dark six-string arrangements that turn out to be Walk Home Drunk's most expressive feature. The motorik percussion and hushed singing act as the mortar that holds them together. The duo's sound blends most impressively on "Old Rules" - buzzsaw chords smoothly transition into tapestries of creamy krautrock melody, forming a tunnel that fully envelops the listener. Everything is moving forward at all times.
Author: Unknown 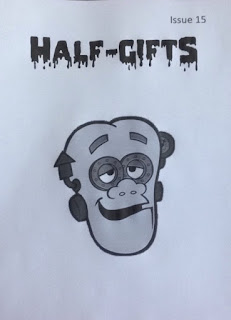 Half-Gifts issue 15 includes interviews with Barlow, Naked Ant, Ma Turner and Funeral Advantage, as well as reviews of recent album releases, japanese soda and a novelty fast-food product. It also comes with a rad digital compilation album, comprised of fall-themed music made by half-gifts readers. You can stream that below.

Order your copy of the zine HERE 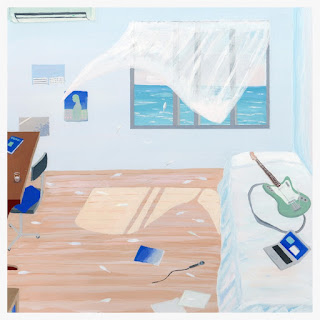 Taking Flight is to trap music what Beat Happening’s self-titled debut was to punk – a thorough re-imagining of the genre that replaces brutish masculinity with lovably juvenile emotion and off-kilter experimentation. While Washington’s Beat Happening built their aesthetic upon amateurish guitar chords and intentional mistakes, Hemsworth and Lucas, hailing from Canada and Seattle respectively, utilize spacey ambience and dreamy samples to accompany chopped-up slivers of hip-hop percussion. Taking Flight is a record that focuses on empty spaces – it mixes and matches traditional tropes of dance music to, paradoxically, create music that is rarely danceable. Instead, the EP acts as a sonic space heater, slowly filling your mind and soul with warm vibez. “Long Time” weaves a Yo La Tengo-esque drum loop through a waft of dreamy flutes and slap-chopped acoustic guitar. It’s not too far removed from the production on Drake’s Nothing Was The Same, come to think of it. Closing cut “You Remain” takes a bit of Travi$ Scott influence in its avant-trap approach, pairing ultra-bassy vocaloid groans with flecks of glitched-out dial-up tones.

Though abstract and, at times, impenetrable, this record’s worth of ambling banjo riffs and electronic noodling is surprisingly accessible. To listen too closely, to try to take a deconstructive approach to unknown species is a mistake – the record is too unstructured, too organic to pick apart and analyze. Separated, these minimal arrangements of twangy pluckings, manipulated loops and ambient noise are rather clumsy and strange, but combined, they are sublime.

The Pennsylvanian duo fashions ecosystems of sound; the most immersive of these worlds appears halfway through unknown species’ B-side on “Beth”. Whispery hums of what I think is an oboe traverse like wispy clouds above an empty Archean earth, in anticipation of the ethereal guitar loops and percussive tectonic rumblings that later enter the picture. Each track is the birth of a new planet, abandoned as quickly as it is lovingly created. Such is the nature of improvisation. We humans can produce staggering beauty as accidentally as we can generate anything. It’s these haphazard masterpieces, moments of extemporaneous brilliance that are the rawest and most organic works of art one can absorb. This is experimental performance at its finest – primal, yet refined.