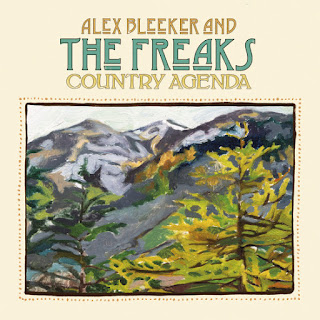 I have plenty of love for the dreamy, folk-tinged "bourgeois-pop" that Martin Courtney and Matt Mondanile crank out at a robotically consistent rate when they're not working on new Real Estate material, but I do find it a shame that the sideline venture of the band's bassist, Alex Bleeker, is often overlooked by fans. Rather than searching for influence in the twinkling lead-guitar constellations of Pavement's Terror Twilight or the cigarette-stained mustiness of 70's soft rock records, Bleeker's quintet of Freaks seek to reclaim the sound of The Grateful Dead's American Beauty, seasoning the mix with just enough airy shimmer to satiate jangle pop die-hards. Their latest output, Country Agenda, is an act of careful sonic surgery that extracts the "jam band-iness" from the jam bands of yore, transplanting them into the instantly-recognizable, reverby songcraft of Captured Tracks affiliates like Mac Demarco and Wild Nothing.

The Freaks are at the top of their game on "Portrait", a cavernous cut that seems to effortlessly form an all-consuming atmosphere of post-rainstorm summer mugginess - peals of slide guitar and splashes of jazzy keyboard drip like condensation down the edge of an unobtrusive rhythm section that provides just enough space for the sneakily pretty vocal harmonies that surface in the tune's infectious chorus, but it's outliers like the bluesy "Honey I Don't Know" and "Turtle Dove", a gospel groove that provides the record some goofy anti-gravitas, that make this record such a joy to re-visit again and again. I wouldn't consider myself a Dead Head by any stretch of the imagination, but to detect their influence incorporated into an indie rock record without a speck of irony is quite refreshing, especially at the tail end of a year teeming with post-modern pop pastiches. Country Agenda is the late evening cooldown after months of gorging myself on the futurist pop of A.G. Cook and Le1f - it's beautifully sincere.

Jack Tatum's 6-year career as the frontman of Wild Nothing serves as a model of artistic progression done the right way in indie rock. He seldom strays from the core influences and timbres employed in past ventures - the amorphous goth-pop gloom of Gemini; Nocturne's shimmering devotion to Rumors-era Fleetwood Mac; the forceful new-wave elegance found throughout much of Empty Estate - and continues to shuffle them back into his deck of ideas, adding new cards along the way. "TV Queen" deals listeners the better hand of the two tracks Tatum recently released in anticipation of his forthcoming LP, Life of Pause, and seems to borrow some inspiration from the mixtape of smoky Italian lounge music he posted on his soundcloud page last year. The tune is somewhat sour, coating cyclical string melodies and splashes of guitar in an acidic chorus effect. This tartness is offset, however, by mellow-yet-solid bass and lazily played saxophone that floats in the backdrop. "TV Queen" offers the satisfaction of an after-dinner dessert - patient with the build-ups to the emotional high of its chorus. The song is filled with flavor but not over-stuffed with clutter.
Author: Unknown


Talk about your descriptive album titles: few phrases could sum up the most recent effort of French psychedelia triumvirate Beauty Camp as succinctly and accurately as La chaleur de l'amour - "the warmth of love". Though its sound centers heavily around the traditional recipe for krautrock (lumbering basslines, tight rhythms and gobs of reverb), Beauty Camp takes care to define its own trademark take on the subgenre that culls textural influence from the guitar tone of early 90's noise rock icons like Sebadoh and Sonic Youth, makes great use of sudden starts and stops to make for fractured, unpredictable songcraft, and employs keyboard in place of bass guitar to craft brooding, Doors-ian atmospheres that slowly pull listeners into the void - a surprisingly cozy and inviting void, that is. The record's fifth and self-titled cut is its most satisfying, evolving from a funky surf-pop ditty into a a towering wall of post-rock shoegazery. Its successor, "Bonne Pioche" also scores points for originality, pairing infectious guitar/steel-drum harmonies with a shuffling beat. It's a fun closing tune that reminds me of the theme song from Nickelodeon's Doug. Overall, this is a fascinating EP that re-creates the sound and atmosphere of a good house show.
Author: Unknown

There is a beautifully organic quality to Blossoming Mums' debut tape on Night People Records - it's as if the nebulous tufts of shoegazey ambience weren't generated by heavily reverberated guitar and warm keyboard pads, but were instead exhaled photo-synthetically by some alien breed of plant. Airy chords dissipate into the aether, warmed by trellises of noodly lead guitar and wordless mantras whispered by Massachusetts residents Robert Robinson and Amanda Freeman. Though Dithering Mornings is best consumed whole - amorphous and narcotic - it reaches its aesthetic peaks when it delves into Lynch-ian territories: "Words of Birds" sounds like your neighbor's hushed karaoke version of the Twin Peaks theme (the Julee Cruise version!) seeping through the paper-thin walls of your apartment. The dissonant intro to "Window Watching" even recalls "Laurie's Theme" from John Carpenter's Halloween score. "No Hands" is also worth multiple replays, a droney take on Real Estate's signature surf-folk approach to indie pop.
Author: Unknown

Settling in the same remote sonic territory as high-energy outliers like Fang Island and Of Montreal, Japanese quintet Tokyo Karan Koron cleverly weave elements of prog, new wave and math rock into their sensory assault of maximalist pop. On the surface, Gin Nin No Entertainers, the band's sophomore LP re-issued earlier this year by French imprint Specific, is a colorful and aggressively catchy assortment of quirky indie-rock; a closer listen reveals layers of complexity and avant-garde experimentation so deftly woven together that it's tricky to recognize their presence. Itinerant melodies leave dissonant comet tails beyond the horizon line of "16 no Beat"'s bouncy, vaguely punk rhythm section while splashes of calliope-like keyboard tint the landscape with a pastel filter; this depth of sound wielded by the band provides plenty of room for smooth - yet drastic - shifts in tone and texure. As tension builds, the tune assumes a hedonistic, carnival-like atmosphere which explodes into a blinding kaleidoscope of Paisley positivity.

Each song on the Gin Nin No Entertainers houses its own balance of free-spirited fun and emotional catharsis - the brief moments that offer rest between the fragmented ideas and strange melodic tangents become the album's most memorable. The flimsy strand of twangy notes - played in tandem on keyboard and lead guitar - that bridge the gap between the sections of sludgy abstraction and nebulous pop on "Yubi De Kiss Shiyo" is my personal favorite of these. Like the interludes on Deafheaven's Sunbather, the short segments of minimalist ambience that act as calming pauses between blistering hurricanes of expressionist rock bear as much emotional weight as the songs they bookend. Gin Nin No Entertainers is a verdant garden filled with variety and fresh creativity that practically begs the listener to jump in and explore.
Author: Unknown 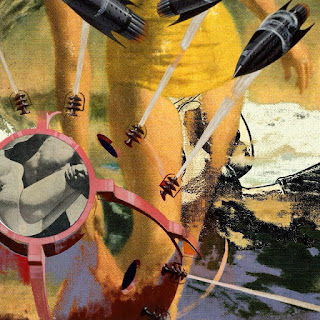 As close to a physical manifestation of the DIY Ethos as I've ever come across, this cassette collaboration between two of my favorite garage rock outfits is a match made in post-internet heaven. Back in late 2014, Ethan Oliva - frontman of veteran shoegaze trio Barlow - dropped the titles of a few of his own songs into the Bandcamp search bar to check up on their streaming stats. Among the results lurked an impassioned cover of Barlow's "In The Air" recorded by New Jerseyan high-schooler Ben Spizuco. Though faithful to the tune from which it sprang forth, Spizuco's rendition of "In The Air" retains the signature charm that accents the entirety of his own discography - it's as raw as rock gets, unapologetically leaving splatters of sonorous mic feedback audible among a tight weave of trebly chords and a few (sometimes clumsy) lead guitar riffs. It was a perfectly punk tune made up of imperfect takes, the product of a single musician whose efforts could stand up proudly next to his those of his influencers. Impressed by the cover and flattered to witness the influence of his music firsthand, Oliva gave Spizuco a shout-out on the Barlow Facebook page.

Flash forward to November 2015: Spizuco has formed a fuzz-pop trio of his own, Naked Ant, and has joined forces with his heroes on a self-titled split tape. On the A-side of the magnetic rectangle, Barlow invites listeners to help clear out their attic, dusting off old unfinished demos. Vocals are added to instrumentals like the Hüsker Dü-esque "Ride" and "I'll See You", a brief power-pop ditty carried by hyper-melodic lead guitar that would make J Mascis proud. Alongside a handful of brand new recordings that resemble Isn't Anything-era MBV, there are a smattering of skeletal song-sketches that comprise my favorite section of Barlow's end of the split. "Down There" bobs buoyantly on the crest of a tinny guitar loop while "For All Time" coats arpeggios with warm layers of ambience that resemble the cry of a Kricketune.

Naked Ant's side of the tape is chock-full of experimentation and infused with the fun of jamming in the garage with one's friends. "School of Thought Graduate" makes use of mistakes in mixing and mastering to maximize shifts in dynamics and texture, making for a tune that ferries listeners down into the murky depths of an ocean of reverb only to send them rocketing toward the surface on the strength of powerful cymbal crashes and muscly chords. The band ventures into a combination of blues and 70s soft rock on "Sailing On The Delaware" and even delves into some slinky free improvisation on closing cut "Lisa". My favorite Naked Ant cut from the tape, though, is perhaps its most unassuming, coyly concealing the alien timbres hidden beneath its surface. "The Wait For September" starts out as a traditional acoustic strummer that hearkens back to the early efforts of Sentridoh, but slowly morphs into a haunting piece of avant-garde wizardry: distant growls of feedback pass through the mix like transient phantoms. Beautifully spooky.