Singles of the Year (so far) Part 3

Perfecting the formula for the sort of fuzz-laden punkgaze purveyed by bands such as Perfect Pussy and the now-defunct Blank Dogs, Black Baron's latest album, Abject Skin, is an incredibly immersive experience, allowing the listener to surf its wave of distortion rather that attacking them with a wall of sound. "Watch Me Sleep" is a great example of the Canadian quartet's ability to do so, submerging shimmering, staticy rhythm guitar in a bath of reverb, giving the whole tune a rather distant quality. It feels as if you've arrived late to one of the band's gigs and you're hearing the echoes of their performance through a thin wall. This raw sound quality adds to the intensity of Black Baron's chugging post-punk energy; all elements of the recording session are captured, down to the squeak of the bass drum kick.

Though it's somewhat of an outlier among the droney, introspective neo-rave cuts that make up In Colour, Jamie xx's collaboration with Young Thug Jamaican dancehall star Popcaan bolsters the brighter end of the producer's color pallet with bouyant percussion, twinkling steel drums and motown vocal samples. Young Thug contributes some of his finest bars yet to the track, his animated and rather melodic delivery pairing perfectly with the vibrant beat. Though brief, Popcaan's verse acts as an extremely danceable bridge, allowing the listener to cool down after subjecting themselves to Thugger's incendiary verses. "Good Times" could easily prove to be one 2015's catchiest pop songs.

Danny L Harle's remix of this brooding bit of gothic post-punk is perhaps the most impressive demonstration of the PC Music collective's almost supernatural ability to turn even the most melancholy song into an astoundingly catchy bubblegum-pop tune. Harle extracts Fredrick Macpherson's Ian Curtis-inspired croon from the track, pitching it high enough to become almost inhuman sounding. He then surrounds the vocals with staccato stabs of glistening synthesizer in the foreground and a few flautal riffs that only serve to add an extra kick of overwhelming sweetness to the remix. Harle's take on "All the Sad Young Men" easily rivals A.G. Cook's "Beautiful" for the title of my all-time favorite PC Music production.
Author: Unknown

New York chiptune trio Crying has the uncanny knack for injecting incendiary potential energy that lurks beneath their twee, poptimistic 16-bit instrumentals, set to burst at just the right moments. "Patriot" is the band's most explosive track to date, draping twinkly GameBoy synths in a heavy coat of roaring guitar chords and Elaiza Santos' overly-distorted vocals. Each element of the recording vies for your attention and blends into the homogenous wall of sound. "Patriot" seizes its listener's conscious, sending it on a thrill ride's worth of corkscrews and sharp turns, making the song's three minute duration feel much more brief. Make no mistake: Crying's chiptune arrangements aren't a gimmick. Rather, they're crucial to the band's kaleidoscopic, unpredictable sound.

Like OG Maco, Rae Sremmurd's Slim Jimmy, Young Thug and most other major innovators in the "new wave" of hip-hop, Denzel Curry's vocal presence on any given track is unmistakable, and never has he sounded more authoritative than on "ULTIMATE". Employing a more menacing take on his delivery from 2013's "Threatz", Curry delivers his bars in the form of a guttural roar, only pausing to put careful emphasis on the connective phrases he wedges between verses. Ronny J's grimy, hypnagogic production composed of distorted percussion and a creepy steel drum melody pairs extremely well with Curry's verses, making for a track that is relentless in its aggression. "ULTIMATE" resembles a a darker, more sinister version of Rae Sremmurd, or perhaps a poppier Death Grips, and hopefully the song gives us an early look at what the landscape of underground hip-hop will look like over the next few years.

Stripping away the warbly phase and tape crunch that characterized much of his earlier output, North Carolinian lo-fi pop purveyor Elvis Depressedly (a.k.a Mat Cothran) lays the inner clockwork of his signature sound bare. "N.M.S.S." is composed of little more than guitar apeggios, cello and snapping in place of drums. Minimal and melancholy, it revels in its own stark simplicity and culminates in a beautiful keyboard solo.
Author: Unknown

Though Oscar Boyle's predilection for frail, musty ambience and minimalist composition is as evident as ever, the British songwriter's flavor of somber lo-fi folk, once heavily inspired by the signature psychedelic twang of the Elephant 6 Collective, is now lightly seasoned with the twinkle of midwestern emo. "Pump and Computer", the main single off of Oscar's sophomore album as Second Hand Flower Shop, is a dreamy bit of bedroom folk that floats like cirrostratus; scattered piano tones act as a thin, icy crust around translucent guitar pluckings. There's a beautiful lack of form on display here. There's no percussive rhythm to hold the tune together, letting the guitar amble aimlessly while improvised piano leads float and dance like specks of dust, illuminated by morning sun between venetian blinds. Boyle's lyrics are more spoken than sung at times, especially near the song's chaotic coda, similar to the bedroom-orchestral closing section of Julia Brown's "I Was My Own Favorite TV Show".

Robed in ego and opulence, Elias Ronnenfelt rises from his throne to a Bowie-esque fanfare of howling saxophone and a funky new-wave rhythm section. Brandishing his microphone as a royal scepter, he drunkenly struts back and forth across the great hall, singing his own praises, detailing his own rise to power, bellowing and moaning, and basking in his own glory. Elias' work as Marching Church is a stark contrast to the dark, sparse arrangements of War or the sinewy post-punk charge of his better-known project, Iceage, and it's a welcome one. Under the new name, he unleashes his inner animal spirit, not creating a character for himself, but unearthing an extravagant, slightly villainous alter ego.

Speaking of extravagance, Russian future-pop producer 813 treats his recent single as an ice cream sundae constructed by an elementary schooler, drowning his already sugary instrumentation in syrupy, saccharine toppings and sauces. Ultra-poppy synth stabs are sprinkled with bell-like leads and choppy, kawaii vocal samples, making for a pastel-toned sensory overload that resembles a trap-influenced carousel calliope. PC Music just might have some competition.

Cloning the the warm, sedimentary guitar tone of the early 90s that's especially present in the droney garage-pop inflection of Pavement, Butterglory and Yo La Tengo, Beach Moon/Peach Moon bridges the gap between the detatched, sarcastic indie rock ethos of the past with the introspective melancholia that dominates today's bedroom pop scene. "Kite Without A String" is the title track of the project's forthcoming LP, blanketing minimal percussion in warm, buttery guitar riffs. Frontman Robert Prisco's vocals sound muffled by their cloak of cozy post-rock instrumentation, reminiscent of Elvis Depressedly's warbly, strained delivery. Composition definitely takes presence over lyricism in BM/PM's work however, as about two-thirds of Kite Without a String consists of instrumental improvisation; peals of distortion ring out like firework bursts in the night sky as trebly, tremolo-picked leads act as faint constellations. Though the album has yet to be officially released, Kite Without A String's title track is sure to make for a stunning closer. 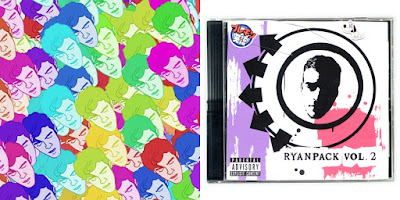 Resting cozily between SOPHIE's rubbery, sugarcoated synthscapes and Yung Gud's vaporous textures in the spectrum of forward-thinking electronic production, Ryan Hemsworth's body of work seems to be the product of a hip-hop alchemist. I often imagine the Canadian beatmaker hunched over a cauldron looking somewhat like Gargamel, pouring flasks of chiptune, new-age, and pop-punk influences into his signature atmospheric cloud-rap brew. If there's any selection from Hemsworth's discography that displays the full breadth of his creativity and experimentation, it's his ongoing "RYANPACK" mixtape series, of which the second installment was released this week. Each pack includes 10 tracks worth of lovably goofy remixes that share an aesthetic that can be compared to J-Pop, chillwave, even Cocteau Twins at times.

Hemsworth's inaugural RYANPACK, released in 2013, is a rawer, but perhaps more imaginative predecessor to this year's mixtape. Acting as a survey of the producer's influences and quirks, RYANPACK volume 1 gives its listeners a taste of his fondness for sparkling glockenspiel, reverby vocals and lush, often orchestral arrangements. Hemsworth's beat for Que's "OG Bobby Johnson" replaces the original tune's sinister combination of throbbing bass and phantasmal synths with shimmering steel drums and breathy, chopped-up vocal samples. It's a wonderful example of his ability to take even the grittiest, most aggressive song and morph it into something cuddly and lovable. His "Game Boy Advance Remix" of "Kush Coma", cloaks Danny Brown's unhinged, dynamic delivery in a wearable blanket, comfy slippers and warm vocaloid melodies. The mixtape culminates in a hilariously melodramatic version of "Real Talk" by R. Kelly.

In addition to remixes of recently released tracks by Drake and Chicago's criminally underrated Sicko Mobb, RYANPACK volume 2 bizarrely makes a foray into pop-punk. Track 3 is a bouncy version of Blink-182's "Feelin' This": Mark Hoppus' and Tom DeLonge's vocals are nearly buried beneath a heavy layer of tremelo while Hemsworth laces the tune with light touches of tinny synthesizer. This stunt is pulled off most successfully on Hemsworth's version of "Plane vs Tank vs Submarine" by Tiger's Jaw, which employs skittering percussion and trellises of electric piano.
Author: Unknown