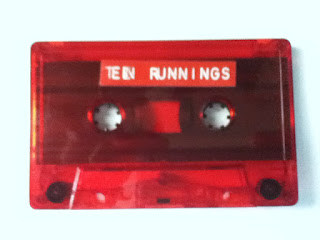 I received this cassette as a Christmas gift from my grandparents last night, and I'm already in love with it. Over the dark two hour drive back home, I must have listened to this album of home demos at least three times. The twangy, fast-paced, Velvet Underground-esque sound of Sea Lions and the indecipherably distorted shoegaze that envelops the four Teen Runnings tracks were made all the more magical by the blurring Christmas lights out the car window.

Despite the fact that all his songs were produced on his own on a four-track, Sea Lions lead singer Adrian Pillado's home demos actually sound richer and tighter than the full band's do on their debut album. Sounding a lot less like C-86 staples like Beat Happening and more like neo-surf slingers Shadowy Men on a Shadowy Planet, this side of the tape feels like it was ripped straight from a corny 60s beach movie. Particularly strong is the opener, "Lurk", a ramshackle jangle-pop song with a memorably catchy hook. The closing track "It Grows/New Age" is a transition from an old-school punk song reminiscent of The Cure's "Jumping Someone Else's Train" to a bluesy jam, all bridged together by an eerie drone section. That's one kind of song you'll only find on a cassette. On a 2009 collaboration with Handglops, Pillado titled a track "I Wish I Was Lou Reed". Never has that wish been more evident than on this album.

I had never heard of Tokyo, Japan's Teen Runnings before popping this tape into the cassette player, and I'm quite surprised I hadn't. It's the sort of band that's right up my alley, with ear clogging distortion and extremely inaudible vocals. Channeling the punk leanings of West Coast bands like Wavves and Best Coast as well as the shoegazery of My Bloody Valentine, the songs on this side of the split aren't as instantly likable as Sea Lions' but they do worm their way into one's subconscious. Nice touch adding the ironic Maroon 5 cover at the end, by the way.

I must admit, this album gets my vote for packaging of the year. The liner notes are produced like a homemade zine from the 90s, and the cassette is hand-stamped with a dymo labeler. The album artwork is great as well. Check it out below, and listen to two selections from the split down there as well. 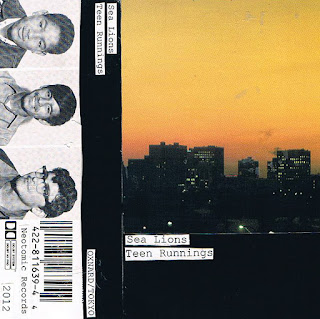 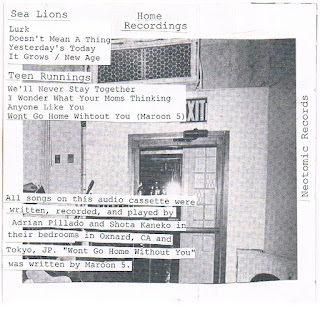