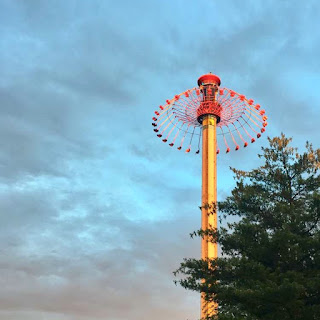 The impending autumn and the upcoming school year have put me in the mood to curate a new Half-Gifts compilation album. In the spirit of the season, I've decided to open up submissions for a fan-sourced effort that revolves around change and growth. If you'd like to record a song that fits this theme or already have material ready to submit, send an email to jude.noel3@gmail.com with the subject line "Compilation Submission". Tracks are due August 21 -- all genres and skill levels are welcome.

There are more than enough snippets of twinkly slowcore haunting Bandcamp and Soundcloud to keep me satisfied -- so many, in fact, that I tend to forget they're there. On the internet, purely atmospheric music's as ubiquitous as air itself. You can breeze through it and even breathe it in without noticing it, focusing on the grittier, more tactile works that live within the atmosphere. Take the Agjijer record I reviewed last week, for example: it borrows occasional cues from Explosions in the Sky and Eluvium on its final cut, stewing in its own reverb juices, but opts to season the pot with math-y accents and a fuzz-faded crescendo. The band realized their need to stand out in a crowd, and went to great lengths to do so. As much as Agjijer's demo was an ambient effort, it was also an emo record, a black metal release, and a jazz-punk endeavor. It's an atmosphere to hack on -- to remind you how important it is to inhale and analyze.

Innovation's cool, but refinement's just as commendable. That's the route taken by Canada's Waterfall Eyes on their sophomore record, Fighting Losing Battles. It's a breath of the fresh stuff, boasting a sparse ambience as lucid and pristine as that of a Robin Guthrie solo effort. Nothing fancy -- just loop-pedal post-rock done better than anybody I've heard since Acid Aura. Guitarist Nathan Chan drips plucked notes like water droplets down a car window. You watch them run laps down the glass pane, colliding and congealing into blobby harmonies on the descent. Melted threads of feedback and slide guitar stretch lengthwise, fading into the distance like roadside cornfields and farms. Tracks are as transient as the farmlands you drive by, passing through and making sonic small talk for about a minute apiece. They're meant to be enjoyed in the moment, evaporating before they can worm comfortably into your cortex.

"Eastern Cities", a collaboration with fellow Canadian solo act Aftertide, lingers the longest, winding its riffs about a rusted maypole that blooms beneath stormy clouds of distortion. The glistening "Gwen" peeks out from behind the overcast veil, buttering its guitar twang with a quivery drone. Each tune spills over into the next, flavoring its successor with residual echo. The tracklist isn't so much a distinction between individual songs as it is a sundial, marking the record's arc from one end of the sky to the other. Fighting Losing Battles is constantly in a slow state of flux, casting sunbeams and shadows on the listener slowly enough to evolve undetected. Even as the album concludes with the jarring release of tech-y energy that is "Ok...", FLB revels in its subtlety. It's best consumed in a meditative state, piped through earbuds but relegated to the subconscious.
Author: Unknown

Math-Rock's a fun genre tag to toss around in a music review -- it's a cute classification that lends itself perfectly to numerical metaphor. Unfortunately, it's also a pretty imprecise way to describe music. Think about it this way: when I use the term "Math-Rock" without any given context, what springs to mind? Frenetic instrumental fret-mashing? Distorted screamo recorded in someone's basement? Bittersweet weaves of American Football-inspired noodling? Most musical mathematicians fall into one of three of these sonic categories. In the case of Tokyo's Agjijer, though, the band's untitled demo tape falls into each of them, spanning their timbral and compositional breadth over the course of seven short minutes.

Opener "henteko" channels the jittery jazz-punk of fIREHOSE, volleying dissonant chords off a wall of digital hi-hats like a tennis player practicing their returns. Bass chases the rhythm guitar as it zig-zags its way through impressive contortions before unfurling into a spacey psych-rock solo. The track shows off the band's technical proficiency while getting the brainy weirdness out of the way early -- it's a good choice for an opening track, and the demo's most replayable offering.

Track 2 cranks up the speed and the volume, transitioning a screeching peal of sci-fi synthesizer into a burst of black-metallic thrash. At 66 seconds, "kowabali" is tough to process on an initial listen. Textures supercollide against driving percussion, masking the record's only vocals (barely-decipherable yowls) beneath a shade of overcast clouds. The audio cuts out mid-verse. It's a flash-flood, a torrential downpour that quickly dries up in the summer heat. Intense, but gone before you know it.

"somemore" is Agjijer's most traditional track, but also its prettiest. It's a mid-tempo groove in the vein of TTNG, lavishing gently strummed open chords on its chilled-out arrangement, then leaping headfirst into an Explosions in the Sky crescendo. It's a solid, serviceable counterpoint to its predecessors that makes for a decent conclusion.

Though not entirely cohesive, Agjijer's demo is a showcase of the band's versatility and knack for setting distinct moods. With the potential on display here, the Tokyo math-rock outfit could very well have the ability to drop an innovative, genre-bending LP in the future. I'm looking forward to seeing what's in store.
Author: Unknown

It takes bold, iconic cover art for a project to stand out in an 8-by-5 column of Bandcamp releases. Among the spacey purples and blues that orbit the streaming platform's 'ambient' section, Chivo Carnada's sophomore single does just that. It's a small flash of earth the color of baked clay, disrupting the gloom of the cosmos: an Unidentified Terrestrial Object. Sketches of South American flora and fauna inhabit the sandy square, which seems to imagine what NASA's Pioneer Plaque might have looked like if it were doodled on by a New Yorker cartoonist.

Like L Bosco, who I reviewed about a month ago, Chivo Carnada is a solo project based in Guadalajara with little social media presence. C.C.'s nom de plume Google-Translates to Goat Bait, a name well-suited to describing his gritty, organic folk meditations. Swaggering acoustic chords lay out an arid terrain on "Choxxo", the A-side of his new digital 7" record, painting a flat landscape for slide guitarist Pedro Snake to sprout prickly pears and succulents that lazily harmonize in the sand. Imagine a more sluggish, twangier version of early Beach Fossils, or their similarly-christened contemporaries Dirty Beaches. The comparison extends to Carnada's lyrics too: poetic and cozily mundane. From what I can gather, "Choxxo" is about taking a late-night trip to the convenience store and deciding what to wear based on the weather. Is it too cold for shorts? Maybe, but C.C. doesn't mind.

B-side "Koyote" is a cover of a mid-90s cut by Babasonicos -- an Argentinian psych-rock quintet. C.C.'s version of the song is compositionally faithful to its source material, but more baroque on the timbral end of things. Sinister guitar riffs are tempered by chiming plinks of piano that seem like sonic bystanders: tonal pedestrians just passing through.

Though primarily a folk release, Choxxo/Koyote is ambient in its approach to instrumentation. C.C.'s arrangements lope towards the horizon, unobstructed by a flat landscape. The record is a short journey into the distant beyond, reveling in its desolate vastness -- ideal listening for long walks or poolside sunbathing.
Author: Unknown

"Okay, why do little kids always draw the sun with a smiley face?" asks Johnny Utah, halting the folk-pop lilt of "deli platter". "We don't know where it stands, emotionally".

The Philadelphian singer-songwriter's an inquisitive guy with an eye for detail. The five tunes that make up his debut EP, Small Dogs, are carefully and intricately pressed into a Communion-wafer-thin canvas of sound, then inked with wheezes of acoustic guitar that seep sloppily into their host. Like Sentridoh and Julia Brown before him, Utah uses the fragile frame of his lo-fi soundscapes to create punchy contrasts. The aforementioned "deli platter," for example, toys with its levels of volume and saturation. flooding its initially parched heave of acoustic chords with a cool gulp of bass. Properly watered, the song's soil is fertile enough to cultivate steady thwacks of percussion and buzzing, three-part vocal harmonies. Occasionally, Utah presses pause on the cut altogether, interjecting with bits of director's commentary before hurtling back into regularly scheduled programming. Though one might expect a hiccup like that to disrupt the rhythm of a track, these interruptions are timed precisely enough to enhance the groove in progress, like a roller coaster's well-placed bend, yanking its passengers awake.

The following track, "angst", is another textural feast. As percussive chords throb out a 4-on-the-floor beat, Utah belts out mumbly bars of Alex G-inspired melody like signal flares fired through the canopy of a thick forest -- barely made out, but understood on a fundamental level. Drum fills are fashioned out of an overturned bucket, tickling the inner ear while hearkening back to The Velvet Underground's "Heroin". This is as poppy as Utah's songcraft gets, riding sweeping chords like waves that gradually increase in size.

"rhino mountain" closes Small Dogs with its most satisfying effort. A spoken word piece dissolves into pluckings of acoustic guitar before coming to a boil. A simple drum machine rhythm bubbles at the surface, dragging Utah's groaned lyrics through murky tape hiss. Twangy riffs tie knots around the arrangements to hold them in place, only to let things unravel into a climactic eruption of noise. Fade to black.

Johnny Utah's debut effort is best when it's at its weirdest. He's an eccentric with a calculated method to his madness, giving each experiment or jarring timbral shift its own purpose that adds to the album as a whole. Already a solid effort in its own right, Small Dogs gives me hope for even more lo-fi whimsy in the future.
Author: Unknown

Winter is to Christmas as summer is to shoegaze: the essence of the season refined into a surge of pure, youthful idealism. While Christmas, situated at the year's end, signifies a period of nostalgic reflection for most, shoegaze snaps forward as if the winter holiday season were a stretched-back rubber band. It's a time for taking road trips, baking beneath UV rays, and grilling massive quantities of protein -- a time to expend energy with reckless abandon. The debut EP by Taiwanese quintet cat in the case, appropriately titled SUMMER, portrays the annual rubber band at the peak of its sailing arc: the dregs of July.

The band's appreciation for dream pop and the dog days is so sincere, it borders on the surreal, taking the form of ice-pop trees sprouting from gradient beaches and carbonated chord progressions that bubble on the ocean's surface, clinging to gummy inner tubes. "Hey Summer," sings cat in the case's uncredited vocalist on the record's title track, as if to gently tap nature on its shoulder. "Your teeth are shining. And guess what I say? I love you." Gritty thrusts of lead guitar are exclamation points at the end of this beach-pop adoration. The tune resembles a Seapony cut mixed and mastered by Slowdive -- a crust of delicate twinkle that hides a trench of reverb beneath.

Sandwiched in the middle of the 3-track EP is "Bog Down", a dance with dissonance that pairs a rather menacing verse with a yelp-y chorus that climbs up its rope of tremelo-picked melody. Closer "Something New" slows SUMMER's tempo, looking to the mid-00s output of Airiel for its sonic cues. The track's guitars hover like humidity -- echoing vocals drip sweat on their surface. The song is a swirling drill bit, boring a hole into the summer sky. In its place, cat in the case hang their undiluted sense of wonder, throbbing like a red, polygonal sun.
Author: Unknown