Never before has electronic music curled up so cozily, so confidently in the silicone depths of Uncanny Valley - Henrik The Artist's debut EP is a maximalist comprisal of long-discarded pop tropes, as hospitable to its listener as an old friend but revealed to be eerily artificial under closer scrutiny, covered in pore-less, rubbery skin. Henrik's the convincingly-built android in your future grandkid's 4th grade class, inviting the gang over for pizza bagels and video games in attempt to better assimilate into human culture.

The six tracks on Friendship are so, sleek, flawlessly produced and mind-bendingly catchy that it's hard not to feel a sense of traitorous guilt in enjoying them - human art is meant to conceal beauty in its flaws, knitting allure into tape hiss or cramming force into a distorted bassline. Henrik's music is scrubbed free of such blemishes - the only external flaw we can latch onto for reference is, ironically, Friendship's eerily transhuman perfection.  Malleable limbs of late 80s smooth jazz melody (à la The Rippingtons) dodge an industrial lattice of bubblegum percussion on rollercoaster buildups to gummy, spring-loaded drops that somehow drip with aggression without employing a single fragment of noise or friction - break down early 00s Eurodance to its most basic components, dye it with the cloyingly commercial pallet of festival EDM, coat it in a Pet Shop Boys laquer and you've re-created Henrik's sense of pop ethos. Maybe sprinkle some Aphex Twin mystique on top for increased accuracy.

Revelling in exaggeration, Friendship is a bold work of sincerity: pretension-free art music that prides itself in accessibility. It's the most fun release of the year thus far, and likely 2016's most unappreciatedly surreal works. Relinquish your human sensibilities and enter the euphoric void.
Author: Unknown

Email ThisBlogThis!Share to TwitterShare to FacebookShare to Pinterest
Labels: Friendship, Henrik the artist

In the year 20XX, cinemas have been all but abandoned - new blockbuster films are made immediately available via Google's new subscription-based streaming platform for VR headset. Advanced soundproofing technology and 360° panoramic cameras now allow for a completely immersive theatrical experience. From the comfort of one's own home to the backseat of a minivan, those fortunate enough to own an Airport™ VR system can experience the thrill of total isolation - you slide the matte grey goggles over your brow, sending your viewing frustum into a state of total eclipse and force the silicone, anthill buds into their respective ear canals. You become increasingly aware of your breathing and heartbeat, your senses dulled. It's your thirteenth birthday and your first time strapping the thing on since carefully removing its twist ties and lifting it from its white plastic casing.

Your index digit wanders your temple in search of a power button, eventually finding an indent on the Airport's™ surprisingly warm surface. Its innards begin to purr, sending friendly shivers through your whole body - the same finger edges toward the volume control to prevent an accidental jump scare. Luckily, the system eases into its main menu gradually, fading into a Nintendo-esque lobby housing grey, rounded cubes, stacked in rows and columns, bearing vague, geometric symbols. Dissonant sitar drones seem to pass by like extraterrestrial debris entering an orbit about your head. Using the control pad implanted on the headset's top left shoulder, you respond to a series of popups' interrogation: email, passcode, the usual. As your head turns, the questions' respective windows move with your field of vision, the sterile waiting room behind it slightly blurred.

Questions answered, you navigate through the Airport's™ digital streaming library until you reach Emily - you highlight the selection with your cursor, click and watch the film's thumbnail, a woman holding a wineglass behind a curtain of sunrise, slowly disintegrate in its state of digital solvency. For a few short seconds, all is black, as empty and warm as the center of a candle's flame. As soon as your eyes' rods and cones can adjust to the darkness, a slightly pungent peal of choral synth ushers in a brilliant burst of light, blasted through a cloudless atmosphere, ricocheting off the chrome construction of an imagined future - (the future of Jetsons utopias, of young adult fiction dystopias, of first person shooters: bustling, clean and sinister). Goliath robots stomp through city streets, hovering vehicles pass overhead, all is in a constant state of flux. Steel clashes against steel, unseen aircraft take off in the distance - Emily is the Futurist vision of Luigi Russolo set to the urgent, orchestral grandiosity of a Michael Bay trailer.

There's something about stepping into a simulation that makes it a childhood experience more exhilarating than any other - we feel small, but in control of our domain in Disney World; we can spend hours tweaking created characters in a video game; we tremble in awe while skirting past the shark tank at the aquarium. Airport's sophomore project, Emily, is the spirit of the simulation captured in pill form, forced down the throat of the the listener. Anthemic undulations of Spielbergian synthesizer are malleable jelly, molded by their surrounding tempest of stock sound effects - screeches, blasts and industrial din. The keening cries of keyboard are those of our consciousness exposed to this peephole glimpse of a reality just beyond it. Channeling emotive force I can't quite comprehend, Emily feels like a trailer for a coming apocalypse, a singularity of militarized beauty. This is music to charge into battle to, to reunite parent and child to, to detonate the enemy spacecraft to, to eat popcorn and don 3D glasses to...
Author: Unknown 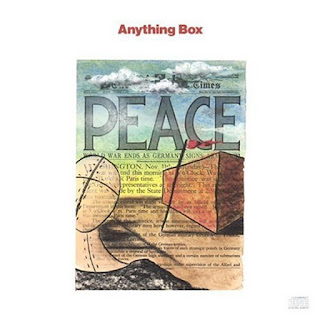 Peace is a double anachronism - though quietly released in 1990 by a New Jerseyan trio of synth-pop aficionados, the record's echoing snares, tinny melodies and faux-British accents place it stylistically between the vibrancy of New Wave and the dark, automaton groove of Depeche Mode. Anything Box is an eerily accurate replica of its New Romantic forebears, a noirish fish in the tattered grunge waters of its own time, but ahead of the slew of Reagan-era revivalists that have spawned from labels like Captured Tracks and Sacred Bones over the past six years. It's this timelessly kitschy appeal that makes the outfit's music so lovable, so immediate - I heard Peace for the first time browsing the shelves of Sugarcube Records in Covington and fell in post-punk love at first chord. Though the record was unfortunately not for sale, I've spent the past 24 hours scouring YouTube for scraps of Anything Box's discography, uncovering nothing but pop perfection.

In a way, Peace is a skeletal synth-pop simulacrum, extracting the essential building blocks of 80s pop and trimming the fat. The instrumental lattice of "When We Lie" is composed of little more than a plodding bassline and watery riffs sprinkled over a four-on-the-floor beat - structurally, it's nothing particularly groundbreaking, yet its melodic prudence and careful blend of spacey textures (which are strangely similar to those employed on recent Yung Lean efforts) make it minimally sublime. Perhaps Anything Box is to the 80s what PC Music's AG Cook is to the 00s - a deconstruction of pop tropes reconfigured into Rothko-esque sheets of color. Frontman Claude Strillo even channels Morrissey's signature melodramatic vocal delivery into a gloomy ballad reminiscent of The Cure circa Head On The Door on "Carmen", a cut that's addictively cheesy: it toes the line between sincerity and parody while remaining undeniably catchy.

Out of place today and even more so in its own time, Anything Box's discography is a misfit collection of elegant gloom that's criminally overlooked - post-John Hughes pop that floats idly in its own universe.

Email ThisBlogThis!Share to TwitterShare to FacebookShare to Pinterest
Labels: anything box, peace, review

Think of Bliss as a spiritual and sonic successor to Starry Cat's eponymous debut record - taking cues from the feline's sedimentary production style, Michigan's Ghost Orchard smashes as many tectonic layers of crusty riffage together as he can squeeze between splashes of distant percussion. Atop a primordial layer of droning bass and scuffed-up power chords lies a marbled deposit of murmured lyrics, dreamily strummed acoustic chords and a squeeze bottle's worth of twee keyboard that reminds me of that chocolate sauce that hardens atop ice cream, forming a brittle, tasty crust.

The baker's dozen of tracks on Bliss are brisk and ephemeral - though taken as a whole, the record is uniformly covered in an impenetrable enamel of fuzz, each individual cut acts as a peephole into its own magic realm - "4th of July" is as shimmery as a Lite-Brite summer sky and as skittish as the teen angst below it; "Don't" bounces blinding UV ray melodies off December snowbanks; my personal favorite song off the record, "October 2013", paints a barren post-halloween landscape, Tootsie Pop wrappers tumbling down a shadowy sidewalk. There's a year's worth of mixtape and playlist fodder stashed into this record - it's worth keeping around for a long time.
Author: Unknown

There's a lovely contrast that gravitationally binds the two sides of this comfy twee-pop cassette - beneath their shared cloak of low-fidelity gloom is a tonal dichotomy between The Loner(s)' mumbled obscurity and Drive Me Home Please's cramped intimacy. The former act, hailing from Rochester, New York, eases into his half of the untitled split tape with gentle acoustic fingerpicking that dissolves against a pane of fuzz like a early winter snowfall that refuses to stick to the pavement - it's a morning's walk to school, as nebulous and muffled as a weary, post-coffee consciousness and warmed by a Marshmallow Coast sweater of keyboard - the tattered remains of December optimism. "I Wanna Get Addicted To Painkillers" continues The Loner(s)' trickle down the veins of suburban decay, poking icy needles through a thin layer of frantically strummed power chords. The A-Side's closing cut, "How To", delves into a sing-song chord progression that recalls the twang of Pavement, accompanied by a cute sliver of landline phone-key synth that drives the song forward - its vocals are softly intoned as if to avoid waking someone in the adjacent room.

On the flip side - Drive Me Home Please (also based in Rochester) composes more minimal synthesizer arrangements that are delivered with a sharp sense of confidence despite its bedroom-pop trappings. The opening cut pairs a barebones piano intro with an anthemic chorus caked in noise - the clean vocals feel jarringly present, like a ear-tickling whisper spoken just a bit too loud. DMHP's self-titled second cut resembles an emo take on southern gospel chord organ songcraft, its warm drones laced with post-punk riffage. The tape concludes with its most adventurous effort, "Apple Cider Vinegar": seven minutes worth of American Football post-rock that slowly builds to a crescendo that never comes - it's wonderfully trance inducing and, in its latter half, subtly heart-wrenching.

Terse and texturally diverse, this split is consistently solid and deserves a few early morning spins on the way to work or school - it's music for waking up to.

Email ThisBlogThis!Share to TwitterShare to FacebookShare to Pinterest
Labels: drive me home please, the loners

"The warm, woolly textures that seep from chocofriendz' keyboard speakers blend impeccably with his skeletal compositions like a sweater over a friendly ghost. Acutely minimal and intense, his songcraft resides on the fine line between powerful emotion and lovably cornball sentimentality that transports me back to my early childhood, more specifically reminding me of the sort of books and VHS tapes that would have filled me with a strange mix of sadness and warmth at the time (Where the Red Fern Grows, this weird Christian educational videotape about talking donut puppet, the Sesame Street Christmas Special...). Imagine a less cynical/angsty take on Teen Suicide's "Haunt Me (3x)" and you'll get the picture - there's something scarily pure and honest about Choco's music that makes it difficult, yet rewarding, to confront." - Half-Gifts
Author: Unknown