It's easy to forget that emo's emotional breadth can extend beyond sadness: you're only reminded of what the genre can do when you hear it pushed to its fullest potential. Cap'n Jazz could do it back in the day, layering sheets of ruddy-cheeked chords and lyrics about "kitty-cats" over punk-rock blast beats. Empire! Empire! did it too, centering around their honest and nostalgic storytelling. Kyoto's By The End of Summer's Laughing EP is one of the more recent installments in the "emotionally diverse emo" canon, bridging the gap between TTNG's wonky math-rock riffage and the teenage adventure of early Blink-182.

The four-song EP is addictively immediate. BTEOS arrangements roar to life without introduction, hurling riff after riff at the listener while frontman Miyazaki's voice cracks in surges of bittersweet catharsis. "Even Now", which takes its instrumental cues from late-80s skate rock, is the standout cut of the bunch, featuring enough hooks and swooping chord changes to fill an entire album in just two minutes.

BTEOS isn't flashy: like Cloud Nothings before them, the quartet pounds out raw, quick tracks that hit right in the sweet spot. The feelings are real and the lyrics are grounded. 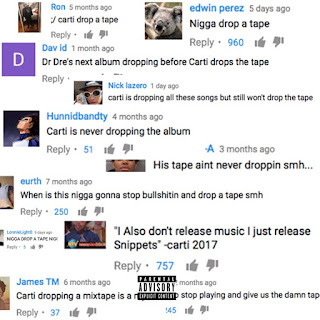 
If Young Thug's the Cocteau Twins of mumble rap (at least according to this semi-popular Tumblr post) then Playboi Carti may well be the sub-genre's answer to Galaxie 500. Like the now-defunct Cambridge trio, he has a penchant for two-chord instrumentals and staccato melodies, haunting these dronescapes with dreamy phrases that roll off the tongue like December sighs: in a cloud of vapor.

Maybe it'd be even more accurate to compare Carti to The Velvet Underground. From the playful experimentation of his self-titled tape's interchangeable cover art to his penchant for lyrics that are iconic and intentionally shallow, he's a Warholian figure: a fourth-wall-breaking protagonist who's as fascinated by stardom in the conceptual sense. "I'm a rockstar," he asserts in the intro to lead single "wokeuplikethis*". Somehow it makes perfect sense. It's intrinsic.

He's William Carlos Williams, too, neatly filing syllables into their perfect instrumental slots while offering just enough information to convey the outline of an image. The aesthetic's executed best on opnener "Location", in which Carti drops a fragmented series of interjections and descriptions that avoid do their best to dodge verbs: ("tats on my neck on my arms" ad nauseam). It's ideogrammatic, exchewing the third-person perspective images that the written word conjures in our minds for the swirl of sensory stimulus that passes through the cortex on the daily. Also, the Harry Fraud beat that carries the track is incredible, especially at 1:31 when its (dare I say) vaporwavey guitar sample screeches to the forefront of the mix.

Carti is everyone that shaped rock 'n' roll and he's all the ideas that let it fall to trap music. Effortlessly, he became the zeitgeist. At least for the 50-minute duration of his mixtape, that is.


Speaking of Warhol, Girls Rituals' EMERGENCY! does 21st century Pop-Art better than any Dean Blunt/Vektroid/Ferraro project I've heard in recent memory, and she does so by just being herself. Like its creator, the record's a product of low-brow mid-00s internet ephemera: Soulja Boy's early MySpace material, DeviantArt's amateurish digital paintings, the neurotic/hyberbolic humor of imageboard sub-cultures, and pretty much anything tangentially related to Newgrounds.

According to nearly everyone who's reviewed EMERGENCY on Bandcamp, "Black Crow" is the cream of this 17-track crop. I'm inclined to agree. Painfully dysphoric lyrics, delivered dryly as usual, are paired with a carnivalesque arrangement of 16-bit riffs that moan and squeak like the Earthbound soundtrack. How do you feel listening to this? How can you feel? "Dig and dig and dig," she sings. "I smash and curse this skin." Breezy chords prop up a melting melody. "I'll be a black crow in my next life flying over an office park."
Author: Unknown