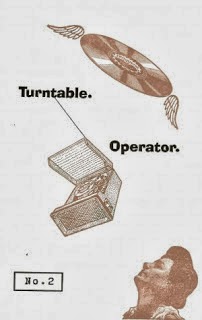 Interview
Frederick Moe (aka DJ Frederick) is a zine creator and reviewer as well as an independent radio DJ.

1) Hi, thanks for agreeing to the interview. My first question concerns your freeform radio program Radio Thrift Shop. How do you record and produce each episode?

2) There often seems to be a theme or criteria that determines what music is played per broadcast. How do you select a focus? Which episode are you most pleased with? Where do you find your records?

To be honest, I wing it 90% of the time. I bring a huge canvas bag of music into the WSCS broadcast studio every Sunday & choose my playlist from there. I like to do segments called “What’s in the Box?” where I explore a box set (LP, 45 or cassette) and “Drop the Needle” when I play something I bought at a thrift shop that I’ve never heard & don’t know what to expect. I also do an occasional set called “Left Off the Map” highlighting an overlooked record. Most shows, I’m musically all over the map. I could play a blues 78 from 1928 alongside a lathe-cut post-rock 7”. Some shows I stick with psychedelic pop, or  jazz, or folk, and on rare occasions I do themed sets, like a set of records from 1949 about Hadacol, an over-the-counter cure-all medicine that was hawked back in the day by a radio station owner turned politician. I’m most pleased with all of the episodes – having the freedom to do what I love and no one to say “play this” or “you can’t play that”. Commercial radio makes me want to vomit. As to where I find my records … I’m an archeologist & go on crate digs.

3) What was your first experience with independent radio?

I walked into the studios of WUNH 91.3 in in 1974 or 1975 (I can’t remember which year exactly – what they say about the sixties is also true of the seventies) and asked if I could be a DJ. Insanely, they said yes. Go figure. I played whole album sides and the b-sides of my 45 collection all summer long. It was great.

4) You are also very invested in zine culture. What made you want start your review site One Minute Zine Reviews? How many submissions do you receive a week?

I decided to review zines on my own because I had reached out to a couple of  zine review zines and no one seemed to invite my involvement. I’m not surprised because I’m an outsider in a world of outsiders. So I started writing a blog and a paper zine to spotlight publications that may not be well known, even within zine circles.
I receive anywhere from zero to five submissions a week and I review about 75% of those – the ones that I have something helpful to say about.

5) You have a few of your own zines as well. What are they about, and where could potential readers get hold of a copy?

My zines are mostly about pirate, shortwave and community radio and independent media, though in the past year I started writing perzines about my life. Antiquated Future and Pioneers Press distro some of my zines. I am so grateful for Joshua and Chask’e at Antiquated Future, they have supported my creative efforts from day one. Jessie and Adam at Pioneers Press are amazing too.

6) There seems to be a zine covering just about every topic. Is there any field of interest that you feel deserves a zine that doesn't have one yet?

Yes. We need a decent zine about harmonica playing!

7) Design-wise, what do you look for in a zine? Which are your all-time favorites?

Design isn’t as important as content. If a “zine” feels too slick I’m generally not interested. The more homemade the better. My all-time favorite zines are written by Chris Mikul from – Bizarrism and Biblio Curiosa.

8) What bands are you into at the moment?

Any band that doesn’t make me want to pound my head against the wall when I hear them – like “here we go, I’ve heard this song 10,000 times before.” I don’t have a favorite band or musician or even musical genre. Music is wonderful in all of its forms.

9) Outside of zines and radio, what else are you invested in?

Making bread (the edible kind), finding a job / income, taking a writing class, loving my family. High on the list for when I have money again is starting a cassette label to release music and/or spoken word recordings.

I also try to post regularly on my blogs. People can read my blogs at zinereviews.blogspot.com and intentionsfortheweek.blogspot.com
Author: Unknown