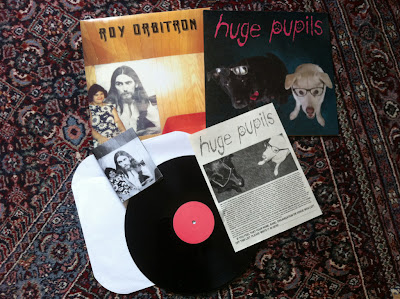 
Usually, the split albums I come across are made up of a couple bands that have an extremely similar sound, yet this LP, shared between two New Jersey based acts, houses two genres that have almost nothing to do with each other. On one side, you'll get an earful of woozy, bluesy vibes courtesy of psych-rock supergroup Roy Orbitron, and on the other, Garage Punk duo Huge Pupils surf waves of electric guitar crafted scuzz. It's interesting and refreshing to see such a broad range of music housed in twelve inches of black plastic.

The sides of the record aren't labeled, instead only having a red circle in the middle of the disc, so whichever band you listen to first will be up to the luck of the draw. I happened to first drop the needle on Roy Orbitron's side. Roy Orbitron is a project consisting of frontman Conor Meara and a collective of around 14 musicians he's brought together from around the country. The first song in the set is "Swallow", a twangy track featuring a gritty rhythm guitar riff and bouncy, spiraling keyboards. Although it's not usually the type of track I listen to, the song has the hazy atmosphere of a smoke-filled room and the nostalgic resonance of Edward Sharpe and the Magnetic Zeroes or maybe White Fence. There's also a jam band vibe that reminds me of the Grateful Dead. I found the layered sound of the tracks that prominently feature violin to be the most sonically intriguing, songs like "Head High" swelling and dissipating like the ocean's tumult on a stormy evening. Things end with the lovely "LBI", the longest track on display here, opening with a lush, 2-minute intro. Guest vocalist "Dinara Yakupova" beautifully describes the smell of rain over sparse piano plunks and well crafted guitar licks. The track is practically worth the price of the entire record itself.

Huge Pupils then step up to the plate to strut their stuff, mainly dealing in aggressive, yet melodic pop-punk not unlike that of West-Coast legends Descendents. "Emergency Choir Practice" opens the side, with its gravely power chords and primitively pounded drums, but it's "F*** School" and the humorously titled "Hüsker Dön't"  that take the musical cake here. The former is an intense song about putting up with annoying classmates, sounding sorta like something Wavves would write, only less distortion-laden. The latter has the lo-fi, poppy sound of an early 90s punk band along the lines of Big Drill Car. Pretty neat stuff.

Other nifty features of this split album include a rad, well laid out black-and-white lyrics sheet and a double-sided album cover that features glasses-wearing dogs and a George Harrison poster. Also included in the box were some cryptic song lyrics written on miniature filler paper and two cassettes, which will be posted about later, as I think I've written quite enough for one day. Listen to "LBI" and "Husker Don't" below.